Montfort has a rich history since its foundation in 1953.

Considered a state-of-the-art hospital, it initially housed an emergency department, surgery, radiology, a laboratory, 200 adult beds and 50 children's beds. The hospital quickly gained a prominent place in the community.

The hospital became non-denominational and public in 1970. Various projects over the ensuing years helped modernize the hospital and expand its range of services. The psychiatry and orthopedics departments, intensive care unit, cardio-pulmonary and electroencephalography services were introduced in the 1970s. The Montfort Long-Term Care Centre (formerly the Pavillon de la Sagesse), located behind the hospital, took in its first residents in 1978. The palliative care department was created a few years later. 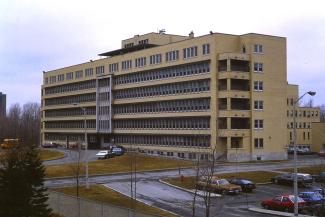 The 1980s also brought a number of changes, including the arrival of an ultrasound machine, a state-of-the-art machine specialising in ultrasound. It was also the beginning of a major renovation and expansion project for the hospital. In an effort to meet the pressing needs of the community it serves, the hospital lobbies government authorities to finally obtain approval and funding to expand the emergency room from 1,000 to 15,000 square feet.

In the late 1980s, the administration realizes that the hospital no longer meets the needs of the community.  It opts for an ambulatory shift and establishes a day surgery clinic for minor procedures under local anaesthesia, and an outpatient clinic for consultations and diagnostic tests that do not require hospitalisation.

In 1990, the ground was broken for Phase II of the expansion project, which involved the construction of the south wing. In 1992 the South Wing (currently Wing A) opened. It housed a number of departments, including the emergency department, the surgical unit and a new nursing care unit. In the same year, the hospital signed an agreement with the University of Ottawa. The affiliation between the Faculty of Medicine and Montfort brought the clinical teaching of family medicine into a Francophone setting.

When the expansion was completed, the hospital began renovating the laboratory and diagnostic imaging areas to accommodate a CT Scan in 1993, a state-of-the-art technology that makes diagnosis and treatment faster, while reducing hospitalization and inter-hospital transfers for patients.

In 1995, Montfort launched two new services: telemetry, a portable cardiac monitoring device that allows the user greater mobility while maintaining continuous monitoring of cardiac activity; and the Family Birthing Centre, which provides a unique and welcoming environment for childbirth.

On February 24, the Ontario Health Services Restructuring Commission recommended closing Montfort, the only Francophone teaching hospital in Ontario and the only one in the entire country west of Quebec.

The reaction of the Francophone community was instant. The historic battle was on, spearheaded by Gérald Savoie, President and CEO of the hospital, Michelle de Courville Nicol, then Chair of its Board of Trustees and Gisèle Lalonde, former mayor of Vanier who became President of the newly-minted SOS Montfort movement. "Close Montfort? Never!" stunned Ontarians and rallied the Francophone population like never before.

After a series of massive demonstrations and extensive news coverage, the case was heard in the Ontario Divisional Court.  In Decembre 1999, Montfort won on the basis of the fundamental unwritten principle guaranteed in the Constitution, the protection of linguistic minorities.

In February 2002, the Minister of Health and Long-Term Care, Tony Clement, travelled to Montfort to announce that the Ontario government of Premier Mike Harris was accepting the Court of Appeal's verdict and would not take the case to the Supreme Court of Canada.

With this ruling, Montfort was recognized as an institution "essential to the Franco-Ontarian community." In this context, its role includes the following responsibilities:

These events ended the greatest battle that the Hospital had ever known since it opened in 1953, and certainly one of the Franco-Ontarian community’s greatest victories.

Indeed, the Montfort cause stood out in three ways.

First of all, the cause was truly national in scope: it rallied Francophone and Anglophone communities across the country, including massive support in Quebec. A debate of such scope had never been witnessed since the fight to defeat Regulation 17.

Secondly, the Montfort cause rewrote the book on crisis management and ways to transform a death knell into a resounding victory. There was never any question of agreeing to a compromise during the five years of struggle: S.O.S. Montfort supporters firmly believed that the slightest concession to the Commission could eventually undermine Montfort and lead to its certain demise.

Thirdly, the Montfort cause clarified the intentions of the Fathers of Confederation concerning minority language rights at the time of Canada’s creation in 1867. Montfort’s lawyers, after conducting exhaustive historical research, proved beyond a shadow of a doubt that the Fathers of Confederation intended for both linguistic groups — Francophones outside Quebec and Anglophones in Quebec — to be equal regardless of their numbers.

The judgements in favour of Montfort were based on an acknowledgement of the principle of linguistic minority protection and respect. The two courts of law in question understood that the victory of S.O.S. Montfort was vital to show that Francophone minorities have a legitimate place in this country.

Once the hospital’s survival was assured, its leaders turned their focus to enlarging the facility and expanding its services. The hospital was preparing for a critical transition that would allow it to fulfill its dual mission as a service provider and a teaching facility working toward self-sufficiency in the health field.

A proposal was made to renovate the existing buildings with the addition of approximately 450,000 square feet or more than double the area of the former hospital.

In July 2005, the Liberal government of Ontario, led by Dalton McGuinty, announced that Montfort would receive more than $171.5 million for a major expansion project New Montfort. Thanks to this investment, Montfort would become a world-class facility offering the best practices and the most advanced technology in the field of healthcare.

Today, the hospital includes five wings: the original 1953 building is now Wing C and the former South Wing has been renamed Wing A.

A significant increase in the number of faculty members has made it possible to welcome and serve the Francophone medical and health sciences students needed to provide health care in French.

In 2009, Montfort Hospital welcomed the new  Canadian Forces Health Services Centre-Ottawa of the National Defence. The hospital sought out this partnership with the federal government because it saw it as an important asset to further expand the reach and reputation of its exceptional care and services.

The “New Montfort” that opened in 2010 is not only the most extensive expansion project in the hospital’s history, but also one of the largest infrastructure project in the history of French-speaking Ontario.

Launched in the fall of 2009 and officially inaugurated in 2012, the Institut de recherche de l'Hôpital Montfort (IRHM) is dedicated to pursuing avenues of research aimed at improving the health of Francophones in minority communities in Ontario and Canada.

In June 2013, the Ontario government granted Montfort the designation of Group A university hospital centre. This is the culmination of more than twenty years of struggle to have Montfort's unique role in the French-language training of doctors and health professionals in Ontario recognized.

This official designation, which guarantees the permanence of a French-language medical education program in the province, comes with increased responsibilities for the hospital's leadership to work closely with the Ontario Ministry of Health and Long-Term Care.

Indeed, in the June 2013 letter which conferred designation as a university teaching hospital on Montfort, the Minister of Health underscored that Hôpital Montfort is part of the solution for increasing access to health care in Ontario, especially by francophone communities. The Ministry and Hôpital Montfort will work together to develop this university teaching role more extensively and contribute to health care in Ontario, specifically in the following fields:

In 2015, Montfort was named one of Canada's top 40 research hospitals, thanks to the work of researchers associated with the hospital. That same year, the Institut du savoir Montfort (ISM) was created, and officially launched in 2017, bringing together the IRHM team as well as Montfort's Academic Affairs Branch. The ISM is one of only two hospital institutes in Ontario - and the only francophone one - that directly combines research and education.

Since its creation, the ISM has established itself as a Canadian leader in francophone research and education. Its unique model, based on the collaboration between researchers and teachers, facilitates the creation and transmission of knowledge.

In 2019, Montfort enters the list of the Top 1000 hospitals in the World, according to the prestigious American publication Newsweek. At the national level, in 2021 Montfort ranked in 55th position amongst Canada's 100 best hospitals.

In June 2021, after several years of planning and construction, the Orléans Health Hub finally welcomed its first clients. Led by Montfort, the Orléans Health Hub project is a partnership between Bruyère, Youth Services Bureau of Ottawa, CHEO, Eastern Ottawa Resource Centre, Hôpital Montfort, ParaMed, Ottawa Public Health, Geriatric Psychiatry Community Services of Ottawa and Home and Community Support Services Champlain. It is is a unique and innovative model that combines a range of specialized and community-based care under one roof.

The Latin word caritas is engraved in the floor of the original main entrance. It means charity or love and symbolizes the philosophy of care upheld by Montfort’s founders, the Daughters of Wisdom. During the 2007-2010 major construction project, management decided to retain this symbol as a reminder of the founders’ spirit of compassion.

In March 2004, Hôpital Montfort announced the creation of the March 22 Medal in commemoration of the great rally of March 22, 1997, when close to 10,000 demonstrators turned out  at the Ottawa Civic Centre to support the SOS Montfort cause.

With 22 copies of the medal minted, the purpose of the medal is to honour the determination, tenacity and pride of the people who fought for the hospital’s survival.

Since 2004, ten medals have been awarded.

In March 1998, the laneway linking Montreal Road to the hospital was renamed Avenue du 22 mars (March 22 Avenue). This name commemorates the anniversary of the great rally of solidarity held at the Ottawa Civic Centre on March 22, 1997.

On June 18, 1997, a veritable parade of community leaders, including Gisèle Lalonde, President of SOS Montfort, and Msgr. Paul Marchand, Auxiliary Bishop of Ottawa, exited the main entrance of the hospital, heading toward Montreal Road. Each participant carried a brick to build a symbolic monument on the hospital grounds.

According to the instigator of this theatrical event, Michel Gratton, (translation) "the monument, deliberately made of bricks … was reminiscent of the insulting comments by the Premier [of Ontario] Mike Harris, [who described] Montfort as a pile of "bricks and mortar”. The monument … was [a] symbol of the steely determination of a community unwilling to bend to the lack of understanding and intransigence of those who were trying to pass it off as insignificant.”
(Excerpt from the book by Michel Gratton, Montfort – La lutte d’un peuple, Centre franco-ontarien de ressources pédagogiques, 2003.)

Michel Gratton named it the "counter-monument". However, the symbol is also known by two other names: one given by its sculptor, Yves (le Valencien) Leduc, "Ô francophones anonymes d’Amérique", and another given by the leaders of the SOS Montfort movement and reporters, the “SOS Montfort Resistance Monument”.

On December 17, 2015, the counter-monument was as finally been given a permanent, prominent place near the main entrance of Montfort - thus marking the last phase of construction of the New Montfort, which had begun in 2006.

In the mid-1970s, a stylized M began to appear on the hospital’s letterhead. This symbol became a trademark of the New Montfort in 2006. This distinctive logo readily identifies the institution as a hospital centred on the community, where patients remain the main focus of the people who work there.

In 2017, the Montfort brand was actualized while respecting the spirit of the original logo.